RON SHANDLER began publishing his unique brand of statistical information under the Shandler Enterprises name in 1986. A fantasy leaguer since 1985 and a simulation gamer since 1971, Ron was the first author to develop sabermetric applications for fantasy league play. He is the author of the Baseball Forecaster annual, now celebrating its 36th year of publication; he is the founder of the industry trail-blazing web site, BaseballHQ.com and the First Pitch Forums nationwide conference series. Ron also helped spearhead the creation of the Tout Wars national experts competition, which was the focus of the “Fantasyland” book and documentary film.

Ron’s work has appeared in numerous publications and web sites. He has written for USA Today, ESPN.com and ESPN The Magazine, and currently The Athletic. He has been cited by many sources, including The New York Times, Wall Street Journal, Forbes, Business Week and Money magazine. Many Major League teams are regular customers of his books and web services.

Ron has an MBA from Hofstra University, is a professional direct marketer and forecasting analyst by trade, and held senior management positions with several international publishers prior to starting Shandler Enterprises. A native New Yorker and die-hard Mets fan, he is married with two daughters and currently lives in Port St. Lucie, FL. 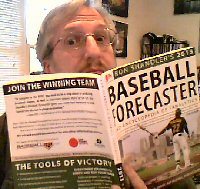 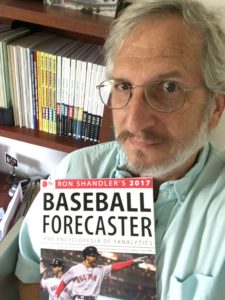 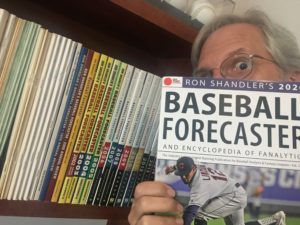 Helped create and participate in an advisory board for the St. Louis Cardinals baseball club.

Received the FSTA’s Lifetime Achievement Award, one of only four people in the industry to receive the honor at the time.

Featured in the book Fantasyland by Sam Walker. Regular columnist for ESPN The Magazine and ESPN.com.

Was one of 12 industry analysts who each contributed a chapter to the book, How Bill James Changed Our View of Baseball.

Published the second edition of How to Value Players for Rotisserie Baseball (by Art McGee).

“Fanalytics” column began running weekly during the baseball season in USA TODAY (through 2014).

“Shandler” appears as an entry in “The Dickson Baseball Dictionary” 3rd Edition.

Retired from LABR and Tout Wars

Invited to participate in LABR, the industry’s first national experts competition. Spent the entire summer in first place, but dropped to third as the players went on strike. Featured in the documentary film “Fantasyland”, based on the book.

The 2002 edition of the Baseball Forecaster appeared in the movie, “Moneyball.” Named to the FSWA Board of Directors.

Wrote the Introduction to Winning Fantasy Baseball by Larry Schechter.

Stepped down from running the operations of BaseballHQ.com.

Stepped down from contributing to BaseballHQ.com.

Restarted regular contributions to ESPN.com (through 2018).

Celebrated the 30th Anniversary edition of the Baseball Forecaster. Celebrated the 20th anniversary of BaseballHQ.com.

Published The BABS Project: Uncovering the Truth About Winning at Fantasy Baseball.

Finished in 4th place, Tout Wars Mixed (but 1 hit out of 2nd)

Joined TheAthletic.com as a weekly columnist.